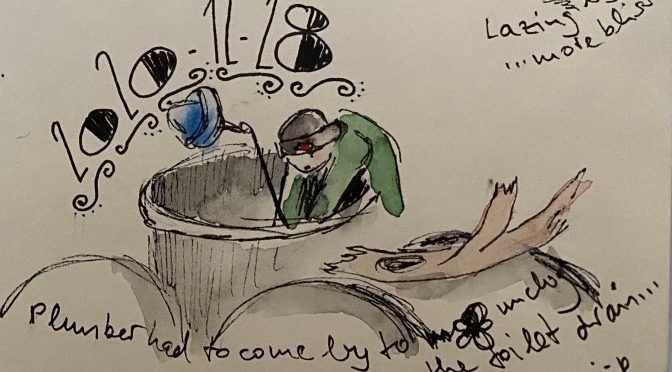 The day started differently than anticipated – an outside control peep hole for the toilet drainage overflowed and this indicated a… situation. The drainage pipe must be clogged.

So the plumber was called, hours spent with unclogging the pipes and our grocery shopping trip postponed to the evening hours.

Apart from standing outside and freezing the tushes off we still managed to have an enjoyable vacation day. In the meanwhile the blockage has been fixed and all is well again, so nothing that couldn’t be handled.

Running has been a two-sided sword lately. While I’ve always loved the serenity and calm, clarity and freedom I gained from running, it is still a sport and if you’re a little under the weather or simply a tad burnt out it can be a real challenge to complete a race. No more feeling like flying over those fields.

Before I went on my 3-week vacation mid-September I was definitely drained, both physically but even more so mentally. And thus I had to realize I wasn’t up to finishing the 10k race I had registered for. After 8k my mind simply shut down and my legs wouldn’t move anymore. I took this as a sign to slow down and seriously re-charge my batteries during my vacation.

I was successful and even though I caught the sniffles and stopped training alltogether for a couple of days, it seems like this was exactly what my body needed.

Thus regarched and mentally ready I got off to this year’s half-marathon of my choice around a most idyllic lake close by. All went well – until km 10…

And that’s when – for some still inexplicable reason – I not only fell, but flew for the briefest of moments and came crashing down on the gravel path: Ouch! It hurt. And once again not only physically but even more so mentally. I know it sounds aweful but I was kind of relieved to see another runner crash at the exact same spot I did only a minute later. Helped me not to feel too awkward… Horrible, I know.

Anyways, after getting cleaned up a little I tried to run on but in the end didn’t have the stomach to pull it through and turned around. I wanted to make sure I hadn’t cracked or torn anything. As luck would have it the halfway mark where I crashed was right where the boats crossed the lake so I was able to hop on and get myself chauffeured back to the finish line.

Luckily, I wasn’t seriously hurt. So the next day despite the road burn, bruising and horrible muscle aches I was able to get up – and even run. As my friend said: Get up on that horse again to avoid a mental block. And so I did. My dear Renntier (running deer :-)) friend took me back to the lake and “made” me finish the second half of the race. Just for the sake of it I added some extra 3-4k to show running who’s boss 🙂

Q: Did you ever crash badly enough to keep you from ever doing something again, say skiing, horseback riding, skating etc.?

Sat, October 22, had us transfer from Kona on Big Island to Lanai City on Lanai. Small but beautiful island with incredible locals and an amazing hotel/restaurant. Loved it!!
Friday, 21 October had us scared of apparently non-existing snakes 🐍 on #Hawaii🌺, enjoying a massage at #islandspirithealingcenter, #magicsandsbeachkona and manta spotting from #outriggerkona ‘s manta viewing deck - what a sight! #hawaiianparadise #paradisevacation #paradiseislands #kona #travelwithbestie #amazingvacation #hawaiication #hawaiivacation #worklikeacaptainpartylikeapirate
Thursday, 20 October started with another run/bicycle tour past King Kamehameha’s statue. We then headed from Hilo to Kona by passing the #pacifictsunamimuseum in Hilo, past #blacksandsbeachhawaii and the southernmost point of Hawaii and thus the territory of the USA. The hotel in Kona welcomed us with a Luau right outside our room.
The first Wednesday of our travel was exciting with a helicopter 🚁 tour around the big island volcanoes 🌋 waterfalls and along the coast. Next we picked up our rental car and drove along the coast to Hawi and then Kailoa-Kona where we thoroughly enjoyed the view of the setting sun 🌅
Last Tuesday welcomed us with a brilliant blue sky, so@a perfect day for an excursion up to the volcanoes 🌋 and an impressive lava tube. The day closed to the view of Big Island’s lava bubbling against the pitch black dark of night.
Getting to Hilo without ID wasn’t an easy feat and took quite some time but worked in the end - after we were rewarded with a Mai Tai on board the little aircraft. The afternoon/early evening was spent with a run/1-gear-bicycle trip up the mountain and back through the jungle and past some sketchy security gates right into the night with pretty scary rainforest sounds to follow us into the dark… but we made it out and enjoyed a most delicious dinner in #Hilo #Hawaii #hawaianislands #bigisland #vacationonhawaii
Follow samstarbucks on WordPress.com
Loading Comments...